from 8 reviews Review It 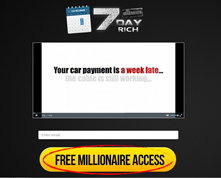 7DayRich.com is a new website and money making opportunity that promises people the ability to make tens of thousands of dollars in a single day, and up to one million dollars in just one week using their system.

But perhaps the best part of the promises made by the video presentation on this website is the fact that this system is being quoted as completely free to use, and that customers will have zero risk when using their system.

The bottom line is that 7DayRich.com is a portal site, meaning that they are partnered with another company called Boss Capital, with the goal of bringing in new customers to their website.

Boss Capital is an online trading platform that specializes binary options, a type of investment platform that asks people to decide whether they believe a specific stock will rise in value (call) or fall in value (put) during a pre-determined amount of time, which can range from one minute to six months.

Customers who make the right choice about the behavior of a stock will receive an immediate return on their investment, often up to about 85% of the investment they made. The video presentation says that software being offered at 7DayRich.com will guide you in making all the investments you need to become a millionaire.

The reality is likely that this company actually receives some kind of a “finder’s fee” from Boss Capital whenever they send someone there who opens an account. Whether you are successful at earning money is irrelevant to them, because they are paid when you simply open an account.

This is not the only video presentation promoting software that will make you a millionaire just by partnering with Boss Capital – in the past they’ve also used the Free Money System, which was also promoted at one time under the name Millionaire Blueprint. The 7 Day Rich program is also promoted at 7DayRich.org as well.

It is important to note that other binary options trading platforms use this same method of promoting enrollment, but perhaps are not as bold in their false advertising as to claim that you are guaranteed to be a millionaire within 7 days. In fact, the reason why these promotional websites change names so often is to avoid being associated with outright fraud once consumers begin realizing that these programs don’t work at all as they are advertised.