from 80 reviews Review It 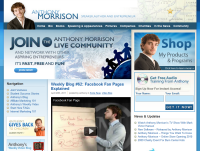 Anthony Morrison is one of the internet’s and television’s most well known internet marketing gurus. According to the bio on AnthonyMorrison.com, he is a “self taught internet mogul” who “launched his first business in 2005, when he was just 21 years old.”

Morrison is most well known, perhaps, for his late night infomercials and his nationwide business seminar tour.  Since he has started eight different successful businesses in a period of only 6 years, according to his website, people who hope to one day be entrepreneurs themselves are often interested in what he has to say.

Anthony Morrison has also published two books, The Hidden Millionaire and Advertising Profits From Home, which explain his success in the internet marketing industry and attempt to give people the information they need to get their own internet marketing venture off the ground.

Books and Seminars: Are They Worth It?

According to his website, Morrison’s seminars are “currently one of the most successful business seminars in the country.”  However, they routinely generate lots of negative feedback.

Essentially, his Hidden Millionaire business seminars try to get people to sign up for business training and a free website, provided by Morrison’s company, that will have a list of all the various credit cards offered in the United States.  This website will allow people to compare and contrast potential cards they are interested in, and when they sign up for information, the owner of the website gets paid for providing a lead to the credit card company.

Online lead generation is a completely legitimate business, utilized by people working online every day.  But people don’t generally get upset at the type of business opportunity that is being offered, but rather the price of it.  While the seminars are advertised as “free information” on how to make money, only the introductory part of the seminar is actually free.

The cost of receiving actual training on how to make money has been reported at $3,995.00 with a continuing monthly charge of $19.95 for website hosting and maintenance, a discrepancy which caused him to be investigated by CBS News in Atlanta in 2009.

The books are a far cheaper version of the seminar and come with a wide range of praise and critique, detailed in a past review on his book, Advertising Profits From Home.  Like most books detailing business opportunities, the vast majority of Anthony Morrison’s information can be found online for free, so what you end up paying for is Morrison’s personal insight on the industry.

Why Is Anthony Morrison So Controversial?

The problem with Anthony Morrison is that he’s just so good at what he does.  The name “Anthony Morrison” has become synonymous with marketing because he does an amazing job of marketing himself.  It’s not surprising that people would want to learn from him.

However, because of this, many, many people read his books and attend his seminars who likely have zero familiarity with any form of online business, internet marketing, marketing or sales in general, or a million other small facets that go toward finding success with an online business, and their likelihood of failure with Morrison’s programs is very high.

The catch-22, though, is that if you do have background experience with online business, computers, internet marketing, or other aspects that you think would help you be successful with an online venture, you probably already have too much experience to benefit from Morrison’s training, which is aimed at beginners.

If you’re wondering whether or not Anthony Morrison is for you, I would advise starting out with a book rather than a seminar – $19.95 seems far more reasonable than $3,995.00.