from 26 reviews Review It 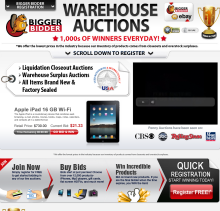 Bigger Bidder is a new penny auction website. You may register at BiggerBidder.net, though they also hold the URL BiggerBidder.com.

A penny auction site, as most of you, auctions off new and in demand items at deeply discounted prices. Each bid you place raises the price of the item by 1 cent, or in the case of Bigger Bidder, 5 cents or 10 cents depending on the particular auction you are bidding in. If you win the auction, you must pay the final auction price in order to receive your prize.

The trick with penny auctions is that you must pay for the bids you place. Most penny auction sites charge you 60 cents for each bid that you place, but Bigger Bidder charges 68 cents on average for bids. Interestingly, though, the site offers many different promotional bid packages, so the price you pay for bids will vary.

Is Bigger Bidder Worth It?

None of these accusations have been proven or verified in any way, and these types of accusations befall all penny auctions.

As far as how Bigger Bidder compares to other penny auction sites, the truth is not well. Their bids are more expensive, at an average of 68 cents per bid instead of 60 cents, and depending on how in demand an item is, their bids can be in increments as high as 10 cents. This means higher auction prices the winners must pay.

In addition, many of their auction items have something called a Reserve Price. This is the minimum price they will allow that item to auction for. If you win an auction with a winning price that falls under the Reserve Price, you will required to pay the Reserve Price instead.

Finally, they do have a version of the Buy It Now feature called “Second Chance,” but these items routinely retail for much higher than regular stores’ discounted prices.