EZ Money System Reviews
Is TheSecretOnlineIncome.com Legit or a Scam? 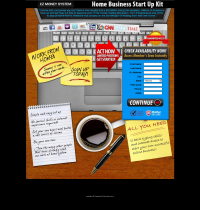 The EZ Money System, available at TheSecretOnlineIncome.com, is a new home business start up kit.  The EZ Money System claims that, with little to no experience necessary, you can quickly and easily use this business kit to begin making money from home.  With only basic typing and internet skills, the EZ Money System promises to let you be your own boss, with your own schedule and own source of income.

Normally, the EZ Money System sells for $39.99 normally, but currently TheSecretOnlineIncome.com is allowing a trial introductory period for $2.97.  For this fee of $2.97, you get access to the EZ Money System website, to look at the system for yourself.

So is the EZ Money System a Scam?

Well, it’s hard to say whether the EZ Money System is a scam, because at no point in time on their website do they even tell you what the EZ Money System is.  Apparently, it’s one of a thousand systems that people are using to make money on the internet these days, but you don’t know if it is affiliate marketing, sales, multi level marketing, ad posting, mystery shopping, auction listing…  The list goes on and on.

The EZ Money System is set up so that you must give TheSecretOnlineIncome.com your credit card number and allow them to charge you money before you can even see what their business is.  Can you even imagine heading into an interview room and accepting a job from a company with no idea what your responsibilities will be, no idea what type of work you’ll be doing, or what your pay might be?

In addition, giving your credit card number to a company that refuses to tell what line of business they’re selling you is not the best idea.  If you read the fine print at the bottom of the order form, you’ll see that the $2.97 charge buys you a 7 day trial, after which you are charged $64.87.

You will be charged $64.87 repeatedly ever 30 days, for… what.  I’m not sure exactly.  Since you have no idea what you’re supposed to be getting for your money, it’s hard to know whether that $64.87 is worth it.  Though I would venture to say, No, it’s not.  If it were, they would tell you what you were getting.

Average Rating for " EZ Money System " is 0 out of 5 based on reviews.