John Stalvey Reviews – Is 15KProfits.com Legit or a Scam? 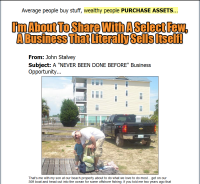 John Stalvey is the creator of a brand new business opportunity that’s generating a lot of attention.  Through his website, 15KProfits.com, John is sharing a system that is supposedly fully automated and beyond lucrative.

When you read through his website you start to get a picture of what his opportunity is all about.  On his site he explains that when you buy into 15kProfits you’ll be getting a fully functional sales funnel that’s ready for promotion.

Your goal will be to follow along John Stalvey as he teaches you how to advertise this funnel online.  If you’re not familiar with a sales funnel it simply refers to a combination of sales tools including: a website, sales page, emails, list building tools, and so on.

Basically, you’re buying into an automated business that’s ready to go from day one, this saves you a lot of money and time from having to develop and install all these features on your own.  Now, the real question becomes what exactly you will be selling through the 15KProfits sales system.

The 15KProfits sales funnel is used to recruit for the Numis Network which is an online network marketing business used to sell Gold and Silver coins.  As a member you’ll use John Stalvey’s sales tools to recruit members into this coin collecting club while simultaneously building your own collection as part of the club.

As with any Network Marketing business there is a payment plan, in this case a binary system that pays you a commission for the new people that you bring in, a portion from the people that they bring in, and also a piece of their monthly auto-ship payments for the coins.

Pros and Cons of John Stalvey and the Numis Network…

Their compensation plan does look very lucrative but at the same time it has raised some concerns from coin collectors.  The issue being that with so many people making money from the system is it really possible for Numis to sell their coins at competitive prices, or are they inflated to adjust for all the payouts.

Many Numis Reps have addressed this issue saying that their prices are similar to what you’d find the coins selling for on popular auction sites.  With Gold and Silver being commodities that fluctuate in value it’s hard to get a straight answer on this issue.

The other area of concern is with the marketing system developed by John Stalvey.  Now, I’ll be the first to admit that their sales funnel is very impressive, the videos and websites used to sell people on this opportunity are top notch.

The issue is that with so many people using the same sales funnel it will be difficult to make yourself standout as a leader in this niche.  If you’ve never been a part of a Network marketing or MLM business you need to understand that part of your success comes from the ability to build your team through recruitment.

Thus, if your only resources are the prebuilt website and Google ad campaigns created by John Stalvey there’s really nothing separating you from the thousands of other people doing the exact same thing.  If you’re an experienced internet marketer you can get around this by using the skills you have to get more creative with your promotions but this could be a difficult hurdle for newbies to overcome.

The one benefit of 15KProfits and the Numis Network lies with their product.  Unlike other MLM’s the good thing about Gold and Silver coins is that at least at the end of the day, if you’re not successful with this business, you’ll at least have an investment with the coins themselves.

Unlike a stack of juice boxes or fitness supplements the coins that you buy will at least hold their value or go up in price.  Just keep in mind that the ROI examples provided in the videos are made from historical analysis so the return on investment is definitely not set in stone.

Overall their payout structure seems good and if you’re a successful network marketer there’s no reason why you won’t make money from this.  The only concerning factor is that these coin club programs don’t seem to stick around which has some network marketing professionals questioning the longevity of Numis.