Kevin Hoeffer is a name synonymous with internet spam; his site KevinsMoneyTree.org has been advertised on almost every popular outlet on the net.  His “make money from Google” ad has plagued Facebook, MySpace, News sites, and countless others leading him to internet infamy.

I first heard about Kevin Hoeffer and his “blog” almost a year ago and assumed that by now he’d faded away, but it appears that he’s back in full force.  When fake blogs first started being used, there were thousands of them; they were exactly the same down to the fake Google checks and bogus story.

Originally these blogs were used to market the Google Money Tree home business kit. This lasted up until several months ago when the FTC filed suit for a number of infractions.  Undeterred, other companies quickly stepped in to fill the place of Google Money Tree and this marketing juggernaut only grew bigger.

The problem is that these sites are too effective at convincing people to sign up for scams so marketers didn’t want to stop using them.  This led to a phenomenon known as “Flogs,” fake blogs that are used to sell bad products.

KevinsMoneyTree.org is a fine example of this marketing tool.  There’s nothing real about the site, from the fabricated persona of Kevin Hoeffer to the checks, the comments, the misrepresented corporate logos, and all the pictures.

However, what really makes this a scam and what’s led to the FTC crackdown is the actual kit that the owners of KevinsMoneyTree.org are selling.

Why the Google Cash Kits are the Biggest Scams of 2009

After reading the hype on Kevin Hoeffer’s site you’re directed to a one page site that looks something like this, 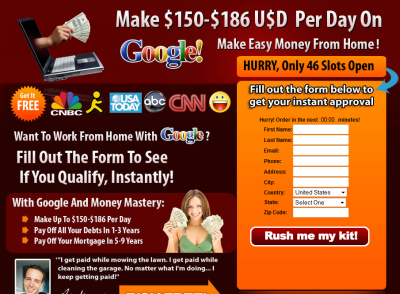 It’s difficult to nail down a name and company for each of these because due to the FTC involvement they’ve turned to fly-by-night marketing.  This means they’re always changing URLS and names for the kits and by the time one is exposed they’ve already moved on.  So while a site like KevinsMoneyTree.org may stick around the current kit that they’re marketing is always changing its appearance.

The main problem is that the entire opportunity is misrepresented.  Google is not hiring anyone and there’s no position where you get paid a wage for posting links on Google.  What they’re referring to is using Google’s search engine advertising platform to market affiliate offers.

This is a legal and recognized way of making money, however you’re still not getting paid for posting links.  The only way you make money is if someone clicks your ad and purchases the product you’re an affiliate for, earning you a small commission.

Nowhere does Kevin Hoeffer say that you’ll need an advertising budget and that you’ll be working on a commission basis; the only thing you hear about is making 5k a month posting links.

Here’s Where It Gets Worse…

What made these Google Kits such notorious scams is not just the substandard info they market but their horribly deceptive billing policies.  On Kevin Hoeffer’s site he says you can get started for $1.95 in shipping and handling fees.

However, what you aren’t being told is that after a short trial period you’ll be charged an outrageously high monthly fee.  This info is hidden in their terms and conditions…

Following your risk-free 3-day trial to MyMoneyPlan, you’ll be charged the monthly subscription fee of $59.84. You’ll have 3 days from your initial sign-up date to access and use the system. You’ll also receive 10 days free access to Search Profit System. After the initial 10 free days, you will be billed $29.71 should you choose not to cancel. After your initial risk-free trials, your subscription will automatically renew approximately every 30 days from the date you signed up. You can cancel any time after the risk-free trial period, in which case you won’t be refunded that month’s subscription charge, but you will have member access through the end of the month, and you will not be billed again. For questions or to cancel you may call 1-888-673-3212 Mon-Sat, 7am-7pm, PST.

As you can see not only do they charge you for the kit but they also sign you up for additional bogus programs that you never even requested.  This is precisely what’s landed these companies on FTC watch lists and has forced them to constantly change their image.

So is Kevin Hoeffer and KevinsMoneyTree.org a Scam…?

The answer is a resounding yes; his site alone has been responsible for taking hundreds of thousands of dollars from innocent people.  Many folks never think to check the Terms and Conditions and only find out about the hidden charges after they get their credit card bill or are hit with overdraft fees.

The point is that the websites are misleading and the information is not worth the high monthly fee.  Additionally, many people complain about trouble getting support, difficulties reaching someone to get their refund or to cancel, and even getting charged without ever receiving the kit.

It’s pretty clear that if you want to avoid a massive headache and unauthorized charges you need to stay away from Kevin Hoeffer and any site that looks similar to his.  In case you missed it, here’s the number to cancel 1-888-673-3212.

Average Rating for " Kevins Money Tree " is 0 out of 5 based on reviews.