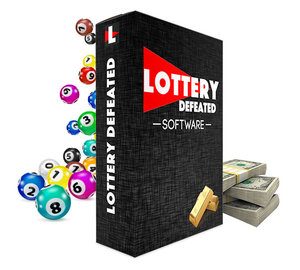 Lottery Defeater, found at LotteryDefeater.com, is a website by Kenneth Leffler selling a software that it claims can beat the lottery.

This product has been sold under different names previously, such as Lottery Defeated (LotteryDefeated.net).

The website goes on to tell the story of Kenneth Leffler, a mathematician who, together with his wife, was struggling to support his family.

He had a large amount of debt and could just scrape by from month to month.

Then, since his and his wife’s hard work seemed to not pay off, he thought about another way to get some money into his bank account – buying a lottery ticket.

Of course, this didn’t work. But then, going through daily press, he realized that there are people like himself who aren’t “lucky” when it comes to lottery, while there are those who get lucky every once in a while.

As a mathematician, he thought there must be a scientific explanation behind the “luck” of these people, so he contacted them and talked about their winnings.

It turned out that the majority of the winners had some kind of system that they employed to get the winning numbers.

After, he thought about all those individual systems, worked on them and used certain statistical formulas on them.

Around two years later, he developed a “formula” for calculating the winning combinations of the lotteries.

Unfortunately, his first hit didn’t pay off, since he didn’t even buy the ticket.

However, it did bring him the winning formula, which has brought him the money he needed – and wanted – many times over.

After Leffler realized he had a breakthrough, he started working with a couple of mathematicians, statisticians and computer programmers. Together, they’ve made a software that successfully predicts the winning numbers of all the US lotteries most of the time.

This software was named Lottery Defeater and it is available for online purchase through the app’s website.

The app is extremely simple to operate, so anyone who purchases it should be able to put it to good use.

In fact, it seems to have helped many of its users come upon major winnings over quite a short period of time.

However, it is not a system that promises to make you a millionaire at the first try, nor will you win every time you use it to come up with your lottery combination.

This seems quite reasonable and Leffler emphasizes that disclaimer a few times throughout his online presentation.

On the contrary, it is reliable in the sense that you will be able to win reasonable amounts of money a number of times over a short period of time and maybe hit slightly bigger wins in a longer run.

If you’re thinking this system will, if its valid, drain the lottery industry and make it go bankrupt, Leffler thought of that too.

He made only around 200 copies available and only around 50 are left for purchase. The moment these are sold, his website will go down.

Why would he reveal his winning formula to the world?

Well, he sees it as a good deed that he owes to the world, since he was lucky enough to find out about it and managed to turn his life around for the better.

When it comes to the functioning and usage of the app itself – it is quite simple, at least the usage part is.

The only thing you have to do is log on to your Lottery Defeater account, pick the lottery you want to play and write down the combination that the software recommends.

Now, the functioning of the software is somewhat more complicated. Firstly, the winning combinations of all the US lotteries beginning with 1985 have been fed to its database, which is called “The Winning Treasure.”

Additionally, it is updated with information on new winnings all the time, so it is kept up-to-date in order for it to be as accurate as possible.

After you’ve picked the desired lottery, it uses the above-mentioned formula Leffler has come up with.

Based on all this data, it calculates the most probable winning number and gives it to you.

Leffler states that this type of lottery combination predictions is not illegal, so you don’t have to be afraid of legal repercussions.

The price of this Lottery Defeater software used to be $950. However, since only a small number of copies are left, Leffler has lowered it to $197 so that the sale finishes as soon as possible.

Leffler says he is so certain in his “invention” that he has included a 60-day, 100% money-back guarantee.

This will enable everyone who is dissatisfied with the app for any reason to claim their invested money back.

If you have any questions regarding refund, or anything else, you can contact them by phone at +18559848523, via email at [email protected], or through their contact page at https://lotterydefeated.net/help/contact.php.

There aren’t any online forums reviewing this software at the moment.

However, those users’ impressions which Leffler has incorporated into his presentation have only been positive.

All of those people speak of how easy the app is to use as well as how good it has worked for them, enabling them to afford things they otherwise wouldn’t be able to.

There are numerous competitors on the market claiming their lottery winning software is the best, most efficient, etc.

One of the most popular ones is Lotto Pro, which is way cheaper than Lottery Defeater and is possible to use for 15 days as a trial without the obligation to buy it later.

Magayo software is also another popular one. However, it states that it is applicable to lotteries from over 75 countries, so it is a bit questionable how reliable it can be.

Advantage GoldTM has quite good customer reviews and the price isn’t that high. However, it is non-refundable, so if it turns out not to work, it will mean you have wasted your money.

If you are contemplating trying your luck with lottery and you really want and need to win, making a system for a more probable win might have crossed your mind.

If nothing else, you may have come across numerous software online that claim that they can predict the winning combination.

Lottery Defeater is not as widely marketed as the other software are. According to the creator, this is because it is so effective that the lottery industry would go bankrupt if everyone could use this app.

The mathematical principles used in this software and the database seem believable enough.

Add the 60-day, 100% money-back guarantee to that and you’ll realize there’s not much to lose if you decide to try out this app for making your win.

Keep in mind that this is entertainment and that if you have any real money problems you should not rely on this system as a way out.