MOSCoachingProgram.com
No Reviews Yet Review It 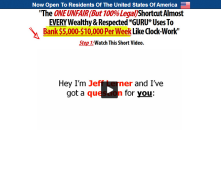 The MillionaireOS Membership is a new work at home training system from creator Jeff Lerner who promises that users who purchase his program and begin using it immediately can earn $9,000 in the next 7 days.

In the “short video presentation” available on the website, Lerner describes himself as a high school dropout who at one time had a debt of almost $300,000. Now, however, in less than two years he says he has become a millionaire.

He claims that you can make the same kind of money with his step-by-step, turnkey system which he will sell to you for a discounted price of $37, down from the regular price of $394.

What to Look For

In general, the claims made by the Millionaire Operating System – the ability to make millions of dollars using a simple step-by-step system – are usually a good indicator of an unethical company or perhaps an outright scam.

However, unlike similar other companies that make the same claims, MillionaireOS Membership does not say that you can earn this living with little to no time or effort.

In fact, Jeff Lerner says that when he was first starting out he often worked 10 to 14 hours a day, and if you speak to most successful internet entrepreneurs, they will tell you that this is far closer to the truth than the websites that promise the same amount of money with just an hour or two of work a day.

Even though Lerner is more honest about the kind of time and effort it will take someone to be successful with an online business, there are still some issues you should be concerned with.

The earnings claims in particular are suspect, as he describes a month where he earns $35,000 as “a bad month.” Also the speed at which he says you can earn money – $9000 in seven days – is unrealistic.

And though he claims that the program costs $37, the Terms and Conditions clearly say that further purchases and monetary investments are necessary, though what these costs are for and how much they amount to is not disclosed.

If you do decide to become involved with this system, it is important to understand that just because the initial $37 cost is described as being refundable for 60 days, subsequent purchases do not necessarily have the same refund policy. Make sure to investigate each individual charge, what it is for, and what the refund or cancellation policy is regarding that cost.