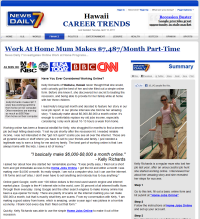 News Daily 7 (NewsDaily7.com) is a web advertisement meant to look and seem like a legitimate news report. This fake news site, and other sites like it, are generally promoting a work at home business opportunity.

Sites like News Daily 7 usually tell the story of a work at home mother, often times named Kelly Richards, who was having trouble making ends meet until she came across a particular work at home opportunity. But this opportunity gave her the ability to work from home making just as much money, if not more, than she would have made at a traditional job.

These fake news sites often have an IP tracker which allows the site to tailor the story to your particular location. Sometimes the news site simply claims to be from your state, while other times it even changes the location of the story to your home town. They do this so the opportunity seems even more real and possible to you.

The Danger of Fake News Sites

The problem with fake news sites is that they are a particularly manipulative form of advertising. Nowhere on the site does it obviously reveal that it is an advertisement, and they claims being made by the article are simply company slogans and sales pitches, rather than fact.

Instead, you must scroll all the way to the bottom of the site, past the many fake comments to the fine print. Even then, the fine print only says that they aren’t actually affiliated with any of the logos on their page – it does not actually come out and say that they are an advertisement for a specific company.

In fact, the fake news site has become so problematic in the world of internet advertising, that the FTC recently announced a permanent ban on fake news sites that attempt to sell health and wellness products, on the grounds that it is actually dangerous for a product making health claims to promote itself using a platform that people rely on to be factual and researched.

Hopefully this ban will set a precedent for the FTC to ban fake news sites entirely. Especially with the current state of today’s economy and job market, it seems particularly unethical to allow companies to manipulate unemployed Americans looking for a way to make ends meet.

If you come across a company using this method to advertise themselves, regardless of what website the ad originally appeared on, the company it is promoting is nearly always a scam, and if not a downright scam, then at least unethical and probably not the company you really want to do business with.