from 72 reviews Review It 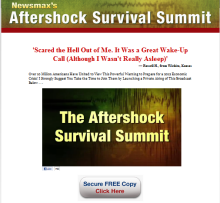 Newsmax’s Aftershock Survival Summit was a website presentation created in 2011 for promoting the ideas and concepts of economists Robert Wiedemer, David Wiedemer, and Cindy Spitzer, who wrote the book Aftershock.

Recently the featured presentation has been rereleased as the Aftershock Survival Summit 2013 and is a video presentation of an interview with Robert Wiedemer.

This interview covers a description of what went wrong with the economy and how he and his fellow economists were able to spotlight these problems before anyone else could.

The Newsmax’s Aftershock Survival Summit 2013 then discusses with Wiedemer the potential problems that may still affect the American and global economies within the next two years or so, and what the average American should do to protect themselves.

Why Did the American Economic Bubble Burst?

According to Wiedermer and his associates, the bubble burst because the growth of the Stock Market and the housing market was artificial. “Artificial” because they were growing at rates significantly larger and faster than both the economy and personal income levels.

Now, this is not especially groundbreaking news. Since the market crashed in 2008, many economists have pointed out this same explanation.

The difference between Wiedemer and his associates, as pointed out by Newsmax.com, is that they weren’t explaining the financial crash, they were predicting it. They published a book in 2006, America’s Bubble Economy, which explained and foresaw the current economic recession.

This impressive economic prediction is why Newsmax is featuring the Aftershock Survival Summit – to get Robert Wiedemer’s opinion on what American’s should do next to protect themselves.

What is Newsmax Offering?

Newsmax is offering a free copy of Wiedemer and his associates’ new book, Aftershock, along with an unpublished chapter that was “too controversial to be published.” You can get your copy for free, with just a $4.95 Shipping & Handling fee.

Along with the free book, you will receive three free trial subscriptions to newsletters: The Financial Intelligence Report, David Skarica’s Gold Stock Advisor, and The Franklin Prosperity Report.

If you do not cancel these trial subscriptions before they run out, you will be charged $99, $99, and $49, respectively, to continue your subscriptions, but if you choose, you can cancel them at any time.

Average Rating for " Newsmax Aftershock Survival Guide " is 1.89 out of 5 based on 72 reviews.