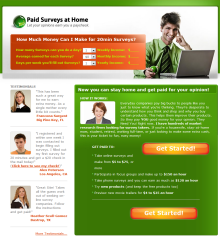 Paid Surveys at Home is a website that promises to connect you with the highest paying market research companies available. For just $68.00 – or $34.00 with their temporary 50% off coupon – you can be connected to over 450 online survey companies, and over 300 additional work at home opportunities.

Paid Surveys at Home says that their members make between $5 and $75 for completing surveys, and up to $150 an hour for participating in focus groups. They also sign their members up for phone surveys, which they claim can pay as much as $120 an hour.

Well, Paid Surveys at Home breaks both rules that most people use to determine whether or not a paid survey company is legit. First, it quotes rarely seen and hard to believe earnings for survey completion. Second, it charges you a fee to get access to the surveys.

Completing paid surveys, or doing online market research in general, is a well documented work at home opportunity. The general rule of thumb is that it does not pay much at all, but it is an easy, stress free way to make some extra money each month.

The earnings that Paid Surveys at Home is quoting are hard to believe. Most well respected market research companies pay $5-$10 for survey completion at their highest end; most surveys pay closer to $1-$2. And considering that these smaller surveys generally take 5 to 10 minutes to complete, that’s not ridiculous.

Also, market research companies are completely free to join. Paid Surveys at Home is charging you because they compiled a list of major survey companies. However, lots of websites have lists of well respected, paid survey companies, that you can have for free. Reviewopedia has one on the Make Money Taking Surveys page. And signing up with each company is free.

Another issue with Paid Surveys at Home that you should be wary of, is their offer of “300 additional work at home opportunities.” This generally means that they are going to give your email address to their partners, who will likely inundate your email box with “special offers” and “once in a lifetime deals.”

If you have already signed up with this company and are unhappy with what you’ve received, Paid Surveys at Home is a Clickbank product, and Clickbank offers a 60 day, no questions asked refund if you are interested.