Penny Auctions
No Reviews Yet Review It 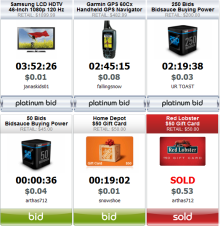 Penny auctions are becoming more and more popular every day, beginning as simple auction websites and growing almost to household names, as in the case of QuiBids.com. In fact, the penny auction site Beezid just paid Lindsay Lohan more than $25,000 to shoot an ad for them; further proof of the rising popularity and competition in the penny auction world.

Penny auctions are a particular form of online auction, where users must purchase bids in order to participate in the auction. While each penny auction site has their own particular prices, the average seems to be around 60 cents per bid.

Each bid that is placed during the auction raises the price of the auction item by one cent. The auction winner then pays the final auction price for the item, and the site ships them the merchandise.

How Are Penny Auctions Different Than Regular Auctions?

As mentioned above, you must pay for the bids you place on penny auction sites, which means that people participating in the auction will end up spending money, regardless of whether they win or lose. To pacify those who lose the auctions, most penny auction sites offer a “Buy It Now” feature, and allow auction participants to place the cost of their losing bids toward purchasing the item at retail price, plus shipping and handling.

Also, unlike traditional online auctions which have a specific time set for the end of the auction, penny auctions allow the clock on their auctions to be extended with each new bid. Since auctions will continue as long as users are bidding, one of the most regular complaints about these auction sites are about the length of the auctions, which can extend for days of active bidding.

Finally, perhaps the biggest difference between penny auction sites and traditional auction websites is the role of the site itself. On a traditional auction site, like eBay, the website itself acts like a middle man between the person selling the item and the people bidding for the item. The website acts as the mediator, making sure both sides of the transaction do as they say. But in penny auction websites, the site is both the seller and the mediator.

Why Are Penny Auctions So Controversial?

Penny auctions receive a lot of criticism, much of it in direct response to the ways they differ from regular auctions. Since penny auctions require you to pay for each bid you place during an auction – essentially paying for a chance to win – many people have said that penny auction sites are far more similar to gambling sites than actual auction sites.

This assertion is dangerous, as all gambling sites must be specifically licensed as such, and currently the US does not issue licenses for online gambling.

Also, the “Buy It Now” feature on most penny auction sites are not as great as they may seem. Generally the retail price of the item purchased through the site is more expensive than it would be from another website, such as Amazon.com.

In addition, penny auction sites are not considered licensed retailers of the specific item you are purchasing. This means that the manufacturer’s warranty is invalidated. If your television or iPad has problems a few months after you receive it, there is no such thing as having it fixed or exchanging it – there is no warranty for the item you purchased.

But the biggest problem with penny auctions is that there is no trust between the users and the auction site. Since the auction site acts as both seller and auctioneer, it works in their favor to have the auctions go as long as possible, which has resulted in lots of accusations concerning bidding bots and electronic malfunctions that result in longer auctions.

Finally, if there is a problem with an item you receive or conduct during an auction, the only person you can complain to is the site itself. There have been complaints posted on Reviewopedia for various penny auction sites that claim they never received prizes which they won and subsequently paid for. When they brought this to the attention of the site, they were simply given more bids.

But the gift of bids is just an attempt to keep you spending money on the site, and raising the price for other bidders, which, at the end of the day, only really helps the website and not you.

Before you spend money on any penny auction website, be sure to search them and see what kind of a reputation they have and what kind of service they provide.

If you feel like you have been the victim of a penny auction fraud – for example, if you never receive your merchandise – you can file a complaint with the Federal Trade Commission.