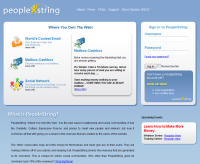 PeopleString.com is a subsidiary of BigString Corp, a company that works with specialty emails.  PeopleString works on the concept that most people use both the Internet and social networking sites to do most of their daily activities, whether it be checking mail, shopping, or reconnecting with friends and family.

According to the information provided on PeopleString.com, sites like Facebook, MySpace, and even Google receive large revenues from advertisers trying to reach the markets who use these sites every day.

People String claims that they will pay out 70% of their advertising revenues to the people who use their site to do the same activities they would be doing anyway, whether that is checking email, surfing the web, online shopping, or online networking.  There are several different ways that you can earn money after signing up with People String.

PeopleString also has a program they call “Mailbox-Cashbox,” where you agree to monitor the direct mailing advertisements that come to your home in exchange for payments.  Beyond getting paid $1.50 simply to sign up for that program, there doesn’t seem to be any hard and fast figures on what you get paid for participating.

So is People String a Scam…?

Actually, PeopleString appears pretty legit.  There have been some reports by customers that the $200 membership is not really worth it; unless you’re ready to work hard at recruiting people, it might take you some time to make your money back. But the other functions of the site – web surfing, social networking, filling out surveys, looking at ads – are available to free members and there doesn’t seem to be any complaints about the company paying their members.

The “Mailbox-Cashbox” program is very new – apparently it just launched in October of this year.  PeopleString requires that you provide your mailing address and then receive a “snail mail” postcard that you must then fill out and mail back as verification.

While there seem to be some complaints about this from customers who are eager to get started, PeopleString does say that the verification process will take up to 90 days.  They do this to ensure that people don’t take advantage of getting paid simply to sign up for the program, resulting in spam to unsuspecting homeowners.

PeopleString isn’t claiming to make you a fortune, and it probably won’t.  But if you are interested in getting paid to do your normal, every day Internet activities (and maybe a couple extra surveys) then PeopleString could work for you.

Average Rating for " People String " is 0 out of 5 based on reviews.