from 220 reviews Review It 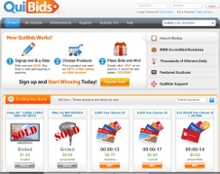 QuiBids.com is the largest penny auction website currently operating in the United States. Penny auctions have been around for awhile, but have only recently gotten lots of attention from people outside of the penny auction community.

Penny auction websites attract people to them by promising expensive, big ticket items at unbelievably low prices – for example, QuiBids shows a new iPad, which retails at $499 for the most basic model, selling for $22.54.  But this winning bid of $22.54 is misleading.  This isn’t the truth of how much it costs to win that iPad.

The way penny auctions work is that you are only able to bid a single penny at any time during the auction.  However, at QuiBids.com, you must purchase each 1 cent bid for 60 cents.  So an iPad that retails for $499 but was won for the grand total of  2,254 one cent bids (or $22.54) which actually cost 60 cents each means that the iPad just sold for $1352.40.

Though the person who wins the item usually has paid less than retail for what they have received, citing $22.54 as the winning bid is extremely misleading.

So is QuiBids a Scam?

All penny auctions, regardless of reputation, are a bad idea and should be avoided.

First of all, QuiBids.com and other penny auction sites require people to pay for the option to bid, but don’t allow them to bid in increments of their choosing.  This means that QuiBids is forcing the price up and profiting all the while.

QuiBids attempts to redeem themselves by offering you the “By It Now” option, which is when you can take the total amount of your failed bids and apply that toward the retail price of the item you were bidding on.  Say you bid $80 total on an iPod Nano that cost $150.  For the remaining $70, Quibids will sell you a Nano.  Well, $70 plus tax, fees, and shipping and handling.

This means that if you get the item from them, the manufacturer warranty is void – if it breaks within the first 60 days, you will not be able to get it repaired or exchanged. If you have a problem within the first 30 days, QuiBids will refund the final auction price you paid, but not a single dime of the bids it took to win the auction.

It’s much better to stick to legitimate auction sites like eBay, instead of spending lots of frustrating time and effort on penny auction websites like QuiBids.com.