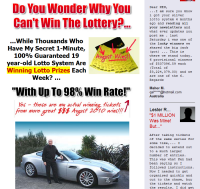 Ken Silver’s Silver Lotto System has been around for a few years now, though it used to be called Honest Lotto.  Silver promises that he can raise your chances of winning the Lotto up to 98% for each time you play, and for a monetary investment of only a couple dollars a week.

The Silver Lotto System is sold for $39.95, unless you try to navigate away from the page, and then you will be offered the Silver Lotto System for $29.95.  For this price, you are supposed to receive an eBook in the next 48 hours giving you the details on this “guaranteed” system.  You also be signed up for the Lotto 80 membership for an additional $19 a month.

The Silver Lotto System is a lottery wheel system, which is not a new invention, and which was not created by Ken Silver.  The wheel system is a method of choosing and arranging lottery numbers in order to have a better chance at winning prizes.  Wheel systems target the smaller second and third tier prizes, so don’t think that the Silver Lotto system will snag you a Jackpot.

So is Silver Lotto a Scam?

In a word, yes. You will find lots of reviews and testimonies saying otherwise on the internet, but that’s mostly because Ken Silver has created many affiliates over the years who realized early on that – like Ken Silver himself – you just make much more money selling Ken’s lotto system than using it.

Many customers report never receiving their eBook after paying for it.  Customers who do receive the eBook and follow the wheel system report investing significant amounts of money into the lotto and receiving very little money back from it.  If you email Ken Silver in regards to his personal money back guarantee, customers report that they get no response whatsoever, much less any info on getting their refund.

The Winners’ Circle, an optional monthly investment club, is the most dangerous aspect of the Silver Lotto system.  Ken Silver organizes a group of people to invest amounts of money into a larger wheel system that is meant to go after the Jackpot lotto prizes. People have invested thousands of dollars into the Winners’ Circle and have never seen one single dollar returned to them.

And when they ask Ken Silver to see evidence of the lotto tickets that he is apparently buying with their money, Silver says this isn’t possible because he needs to protect his system.  Don’t risk it – stay away from SilverLotto.com.

Average Rating for " Silver Lotto System " is 0 out of 5 based on reviews.