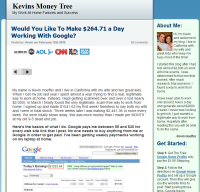 I was surprised to come across two websites still featuring Kevin Hoeffer and his make money posting links on Google kits.  Websites like www.kevinsmoney-tree.com and www.kevins-money-tree.com were rampant in 2009 until the authorities caught on and launched massive investigations into these fraudulent businesses.

Google itself stepped in and banned the advertising accounts of anyone promoting anything that had to do with make money on Google kits.  These actions seemed to work as these programs disappeared, which makes the reemergence of Kevins Money Tree all the more puzzling, as the owner must know it’s only a matter of time till the sites gets flagged.

Why are The Kevin Hoeffer Money Tree

END_OF_DOCUMENT_TOKEN_TO_BE_REPLACED

Kevin Hoeffer is a name synonymous with internet spam; his site KevinsMoneyTree.org has been advertised on almost every popular outlet on the net.  His “make money from Google” ad has plagued Facebook, MySpace, News sites, and countless others leading him to internet infamy.

I first heard about Kevin Hoeffer and his “blog” almost a year ago and assumed that by now he’d faded away, but it appears that he’s back in full force.  When fake blogs first started being used, there were thousands of them; they were exactly the same down to the fake Google checks and bogus story.

Originally these blogs were used to market the Google Money Tree