from 244 reviews Review It 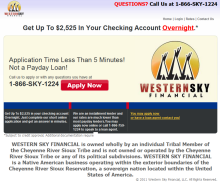 Western Sky Financial is an installment loan company who claims that you can get up to $2,525 in your checking account overnight by completing an application that takes less than 5 minutes to fill out.

Recently, the Western Sky commercials have been generating a lot of buzz online, mostly because people find them humorous but also because some people are questioning the claims made in the commercial, specifically your ability to receive thousands of dollars overnight.

It Is Expensive, But There Is No Collateral Required

In the commercial, the spokesman claims “Yes, the money is expensive, but there is no collateral required.” This is a common theme within the payday loan industry.

Before you borrow money from Western Sky, look at their Rates page which describes the APR as well as the loan fee that will be assessed depending on the loan amount you are requesting.

The APR, or Annual Percentage Rate, is the amount of interest you will be required to pay back within a year. When loan companies do not require collateral or high credit scores to approve a loan, it is generally because the APR they charge is extremely high.

The Bottom Line on Western Sky

In the US, individual states have laws that govern payday loan companies and are meant to protect the borrowers from extreme APRs and unrealistic payback schedules.

In the past when Reviewopedia has reviewed online payday loan companies, I have pointed out that borrowing from an online company that is based in another state may make it difficult for your state laws to protect you from predatory lending practices.

In the case of Western Sky, this is further complicated by the fact that Western Sky is based in the Cheyenne River Sioux Reservation, which acts as an independent nation within the US, meaning that you could potentially have no protection from them at all.

Note: If you’re interested in learning more about Payday Loans check out our detailed guide, “Payday Loans Explained: Should You Ever Get One?” for more info.