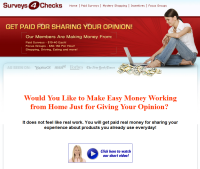 Sarah Garringer and her website Surveys4Checks.com are a relatively new addition to an old and well loved area of the work at home arena – taking surveys online for money.

On the Surveys 4 Checks site, Sarah explains that major corporations like Coca-Cola, Starbucks, and McDonald’s spend billions of dollars to “get your opinion.” For a one time only fee of $49.99, she’ll send you a list of top rated companies to get surveys from, as well as giving you tips and support for figuring out how to make the most money possible from survey taking.

In fact, major corporations do pay billions of dollars to market research companies to figure out what consumers want, and one of the ways these research companies get this information is by paying people to take surveys.  But the truth is that making money taking online surveys is not as straightforward as Surveys4Checks makes it seem.

First, Surveys4Checks.com works very hard to make it seem as though the only thing you need to make $40,000+ a year taking surveys is the time and effort you’re willing to put in.  This simply isn’t the case.

These surveys are used to gather information on a very specific market. For instance, Starbucks might want a survey done on males ages 16-20 who drink energy drinks on a regular basis but aren’t currently coffee drinkers.  If you’re a 30 year old stay at home mom, it doesn’t matter how many Red Bulls you drink or how much time and effort you would be willing to put in on that survey – you won’t qualify.

So is Surveys 4 Checks a Scam?

While there have been some complaints about their customer service and reported difficulty in trying to get a refund, the reality is Surveys4Checks.com is a scam simply because they are charging a fee for a service that is completely free.  Reputable market research companies benefit greatly from having large pools of people to whom they can send these surveys, so they allow people to sign up for free.

Also, Surveys4Checks makes claims and offers stories of people quitting their day jobs because they can replace their yearly salary with the money they make taking surveys.  Unfortunately, this simply isn’t true.  Many people make extra money by taking surveys, as much as a couple hundred dollars a month, but if anyone has been able to translate this opportunity into more money that that, I haven’t seen it yet.

But if you are interested in making extra money by taking online surveys, then a great place to start is with our vetted list of market research companies. They’re all free to join and have paid out cash rewards to their members; take a look at our Free Online Surveys List.

Average Rating for " Surveys 4 Checks " is 0 out of 5 based on reviews.