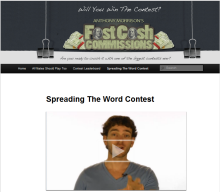 Much of the buzz is coming from the Spread the Word contest being hosted by Morrison himself. The contest offers four different prizes which will be given to 26 chosen contest winners.

The prizes range from small cash awards of $250 all the way to the grand prize – a 3 day, one on one mentoring packaging with Anthony Morrison himself in Jackson, Mississippi, valued at $35,000.

How Do You Win?

The contest is open to anyone who wishes to join, including affiliates of Morrison’s previous programs. In order to have the best chance at winning the competition, all you have to do is “spread the word” about the upcoming October launch of Fast Cash Commissions.

To do this, Morrison has a point system set up where he awards points based on the type of sharing you are doing. Contestants will win points for sharing posts on Facebook and Twitter, as well as posting YouTube videos and commenting on Fast Cash Commissions content across the web.

All the “points” you earn are actually entries into the contest. Winners will all be chosen randomly, so the more times your name is entered, the better your chance of winning.

What is Fast Cash Commissions?

The idea behind Fast Cash Commissions will be largely about generating free traffic to your website – not unlike what Morrison is accomplishing with his “Spread the Word” contest.

As a small introduction to the type of information Fast Cash Commissions will be offering, Morrison has a short, simple explanation of how to best identify your target audience on Twitter in order to share your business opportunities with them.

It is assumed that Fast Cash Commissions will be focusing on the use of social media networks to effectively expand and market your business, but we’ll have to wait until October to know for sure.