Paid Surveys Authority
No Reviews Yet Review It 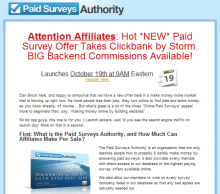 The Paid Surveys Authority (www.PaidSurveysAuthority.org) is a new paid surveys website from Dan Brock, just launched this morning, at 9 am EST, and is currently available for new members to join.

The market research industry is one of the most popular methods of making money from home. It requires no particular skills and anyone can earn extra income each month by simply answering questions with your own personal opinions.

But it is difficult to qualify for every single survey available to you, so usually people just make money taking surveys as supplemental income, not to replace their day job. Paid Surveys Authority, however, says their company is different.

According to Brock, Paid Surveys Authority will teach you how to safely and properly make money with paid surveys, as well as give you direct access to a database of the highest paying survey offers.

In addition, many market research companies have been accused of failing to pay their survey takers or by “disqualifying” survey takers in the last couple questions of a survey so they don’t have to pay them for their time.

In addition, after the launch, members will get a chance to vote on the survey companies they complete surveys for. If enough members have a negative experience with that company, Paid Surveys Authority will remove them from the database.

Well, Paid Surveys Authority seems to be speaking a good game, but since they only launched today there is no real way yet to tell if they will follow through with what they say.

In general, the rule with market research is that you should never have to pay to join a market research company, but Paid Surveys Authority is charging an upfront fee of $37.00, along with optional upgrades and other upsell options which could result in lots more money being spent.

They are a ClickBank product, though, so if you sign up for their program and aren’t happy with the product you receive, you do have the ability to get a 60 day, no questions asked refund.