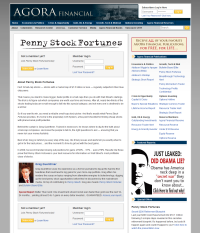 Penny Stock Fortunes is a popular newsletter written by Greg Guenthner and distributed by Agora Financial.  Penny Stock Fortunes promises to give its subscribers the inside information regarding the trade of penny stocks, which are stocks valued under five dollars a share.

According to their website, Agora Inc. is a holding company for publishers of information in a variety of fields, like finance.  It’s important that you understand that the financial information distributed by Agora Financial does not come from Agora Financial, but rather from third party sources that simply use Agora to distribute their information.

The Penny Stock Fortunes newsletter costs $39 to subscribe to for one year, and will automatically be renewed at $59 for each subsequent year.  You can cancel at any time, but you must cancel within the first six months of your year subscription in order to qualify for a refund.

So What’s the Deal with Penny Stock Fortunes?

Penny stock trading is a difficult thing to endorse, for one simple reason: they’re so cheap.  This sounds contrary to logic, but the reality is that because penny stocks are so cheap they are easily manipulated.  A company could buy thousands of shares for pennies, then use their resources to encourage people to buy the stock, resulting in the price rising, at which point the company sells and the stock falls again.  But not before the company has made their profit.

This is why Penny Stock Fortunes by Agora Financial raises red flags.  Greg Guenthner isn’t a financial analyst, he’s an ex-journalist who claims to “dig up” the hard to find information about which stocks will rise next.  His newsletters could easily be a part of potential price manipulation.

Agora Financial has already been charged by the Security and Exchange Commission for a similar situation.  A third party that was working under Agora Inc. distributed financial newsletters that promised investors inside information for a fee of $1000.  After collecting over one million dollars in fees, it turns out that this third party had no such information.

It’s understandable that penny stocks would be intriguing, especially with the promise that for a small investment you could potentially make huge returns.  But the reason why penny stocks are so attractive – their price – is the same reason why they have potential to be dangerous.  I would be careful.

Average Rating for " AgoraFinancial.com " is 0 out of 5 based on reviews.